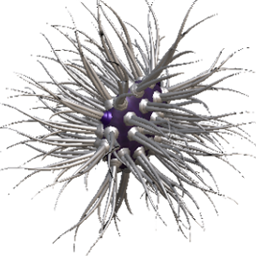 The Lahst Thingh Iy Sor Beefor Geting Wolfd Woz An Anemonee Eeting Mie Crab DOUGLAS HADAMS' 'THE DAY I TRIED PEASE PUDDING'
Ah, who hasn't read that classic novel? Back before spelling was invented, the Anemone was a most feared poodle. Named after a type of marine flaura from some little-heard-of planet, it would go out at night (well... the space equivalent, which was when the Kudu practised that intriguing art of 'Sun swallowing') and attack passing vessels with prams (as in hitting them with buggies - squealing children and all). The trauma left many an unflinching, war-hardened veteran tucking in to bushels of banana croutons to drown out their misery the addictive foodstuffs with their crunchy yet... surprisingly flavoursome aromas. Since then though, Kudus have become a lot rarer, and prams have stopped being mass-produced. In the face of such events, the Anemone has since fallen into insignificance. Still, they provide a nice distraction to kill for pilots who are beginning to find rogue pirates child's play (since most of them are children, this comes as no surprise).
Present alone in Arcturus and Quan.