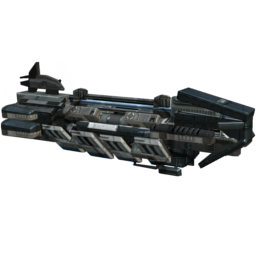 "The Atlas will be able to carry the sky and more! Just pay me lots of money." - Roger McBEARD, Chief engineer of the Atlas.
The designer of the atlas certainly succeeded in mega cargo. Named after a titan from Greek mythology, the Atlas is more than capable of making its owner rich (probably the best freighter in the game). The one inconvenience of this ship is the satellite dish, which tends to snap off a little too easily (a passing gust of wind... or a passing flying 'nana). After losing the first, pilots are recommended to leave it - the dish is reputedly just for decoration.