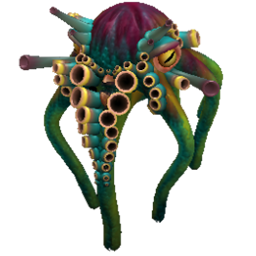 "I was never a fan of molluscs; least of all molluscs from the sea.", KEVIN McDUH.
Kevin was Brian's sister.
Cephalopods have changed (if only slightly) since their days slaving on earth. Whether their gills process photons or dissolved oxygen in the sea though, the important thing to note when encountering these creatures is the LARGE-TENTACLEY-SUCKERY-THINGS-WHICH-WILL-DEVOUR-YOU abbreviated to 'Blowholes' (intrigued readers may want to take note that the technical term nowadays for the creature's arsenal is in fact 'The Biscuit Tins' ever since spelling was re-invented by the Bourbonites of Birmingham back in '93... But 'blowholes' makes a lot more sense).
They're not very nice on the whole - so don't go poking one (unless it looks particularly lonely, in which case it would be the loving, Christian and traumatic thing to do).