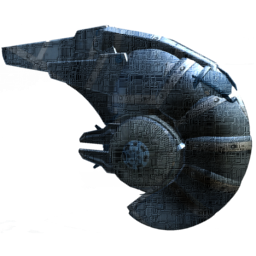 "Pray tell; what kind of insects do you have on YOUR planet?" - Interesting-looking man
Not to be confused with its intimidating cousin: the Wombat, this ship was the first ever to be commissioned by a Norwegian folk-singer. A little something about space travel: you know all the hype about "3... 2... 1... LIFTOFF?" - well that was redundant YEARS ago, but it looked pretty cool, so they still run in that vein today. But the Aggro-Saxon designers of the Firefly wanted to push boundaries, so rather than decorate the propulsion system with the usual decorations (i.e. a rather satisfying BOOM) as you soar off into the sunset, spectators are instead greeted by a gentle coating of tar-coloured milk, which siphons feebly out the behind of the vessel. For this reason, (and moreover, the fact that most pilots tend to use purpose-specific vessels) the firefly isn't immensely popular.
A nice all-round ship, the Firefly matches perfectly to its many affectionate nick-names; just not so much with its actual one.