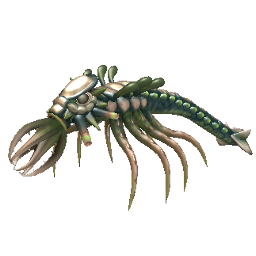 Quote
The Krill would be, in fact, relatively harmless by itself... unfortunately, natural selection decided that the Krill wasn't pretty enough by itself, so it developed a species whose sole habitat was the Krill's jaws. The 'Wetfishpig,' a dangerous creature that originated on those famous Narokun beaches floats aimlessly through space until it finds a Krill... On discovery, it immediately inhabits its mouth and consumes everything that the Krill floats into; far from enjoying the experience, the Krill has to live on nothing but... Let's not go there. Commonly mistaken for teeth, the Wetfishpig has alarming flexibility and is prone to retreat holds and any new pilots shouldn't think about poking them until much later on (and it's nice to ask permission from the Krill first before blowing it up).