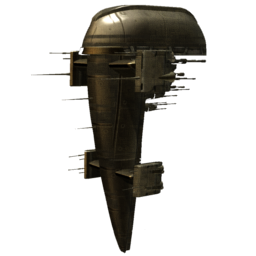 "OAAAAAARRRR"
Captain Paddle was the pioneer of space pirating. He didn't have an eye patch or a beard. In fact he was the most disappointing pirate the galaxy has known and so was included in public circles. In fact, it's hard to find any evidence that he did anything illegal at all... Unfortunately for we noble travelers, the luckless individuals who have lost their way and are classified as 'Rogue Pirates' aren't quite as unrecognizable. They WILL have your guts for garters but give it a couple of weeks and you should be able to take them down. Unfortunately, they're both dead hard to find (almost always cloaked) and dead poor (so very dead) and it's a bit of an anti-climax when you find a couple of tonnes of light ore in their smouldering wrecks. Pirates. Gr.
Probably most common in sector: Valence (5, with the possibility of them all sharing the same tile) or Narokan (at least 5)